Electrical power grid operation is growing in complexity, and the threat of catastrophic outages has led to new regulatory standards requiring that power grid operators have wide-area views of the grid.

I designed and evaluated wide-area visualizations to help operators monitor wide areas of the North American power grid, both within and outside of their own jurisdictions.

Working with end users, IT developers, senior management, and a fellow human factors researcher, I recommended UX improvements to the industry partner, conducted a work analysis, and set up the foundation for their operational human performance initiative.

I conducted critical incident interviews with 8 current power grid operators, in a format adapted from the Critical Incident Technique (Flanagan 1954). Questions focused on past incidents that operators experienced first-hand in the control room, with the goal of designing to avoid past pitfalls. A total of 22 past incidents were recounted, and 2 top recurring issues were data unobserved (4 incidents) and unclear consequences of an action (3 incidents).

My colleague and I led focus group sessions with 6 crews of 7 operators each, where crews discussed past incidents while drawing from the experiences of the entire crew that dealt with the incident. At the end of the session, we handed out a questionnaire on control room ergonomics and software tool development. 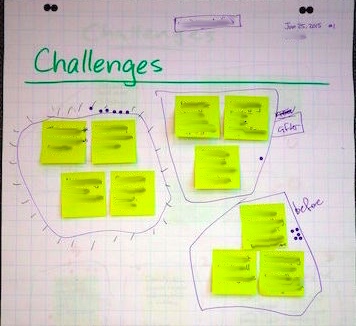 Compiled challenges from one focus group.

Throughout this project, we did field studies in the control room over a period of 60+ non-consecutive days, to see how operators dealt with real-time events. The extensive knowledge-gathering process helped us understand operators’ workflows, their problem-solving methods, and usability issues that they face. The process also helped narrow the scope of my research to target the lack of wide-area monitoring visibility among operators’ tools.

We analyzed our findings from the knowledge-gathering (above) in addition to a literature review. We conducted a Work Domain Analysis (WDA) of power grid operations, which has been published as a chapter of Cognitive Work Analysis: Applications, Extensions and Future Directions. The WDA was a way to map out functional relationships between different elements of the power grid, and at different levels of abstraction as operators manage the power grid.

I translated the information requirements to low-fidelity wireframes, then conducted informal tabletop feedback discussions with 4 operators individually. They provided feedback on the preliminary concepts and details on their information needs, so that I could iterate on those wireframes.

I then developed high-fidelity prototypes. I conducted usability testing where operators answered 11 task questions based on the information in the displays. They then provided open-ended feedback on what they liked about the design and what could be improved. The usability testing ended with a questionnaire, including questions from the System Usability Scale (SUS). 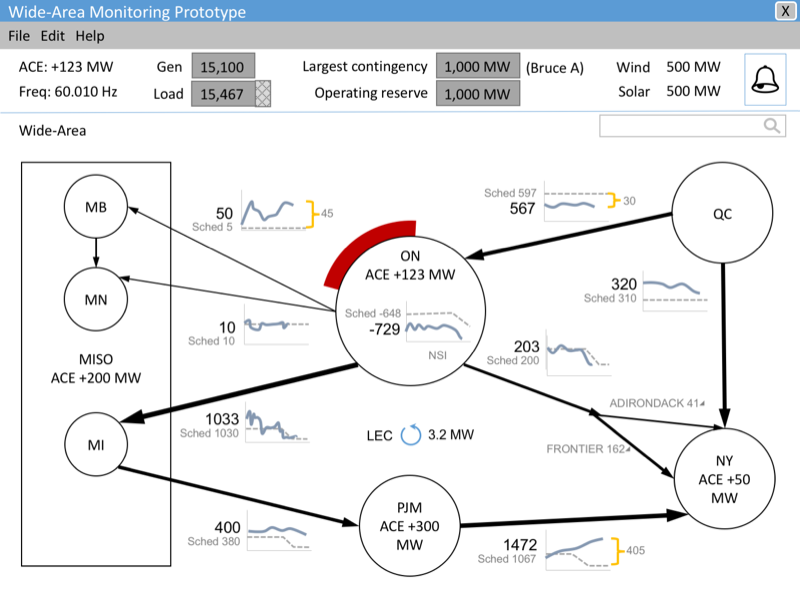 One of the views in the high-fidelity prototype, for the wide-area power grid across multiple jurisdictions. The design had been iterated on after 2 rounds of feedback and usability testing.

Nine out of the 11 task questions were correctly answered by most participants on their first time seeing the prototype and without training on the design. A few design changes were made in the final iteration of the prototype to improve the ease of navigation and to meet the technical constraints of existing mathematical models. The prototype earned a mean SUS score of 77/90 (SD = 7), normalized to 86/100. (A SUS question on integration into a system was not applicable to this prototype, and was removed from the questionnaire.) Participants liked that the displays consolidated information that had been spread out across separate screens in their current software user interface. They believed that they could detect problems with the power grid more quickly with the new interface compared to their existing tools.

< Back to Featured Work